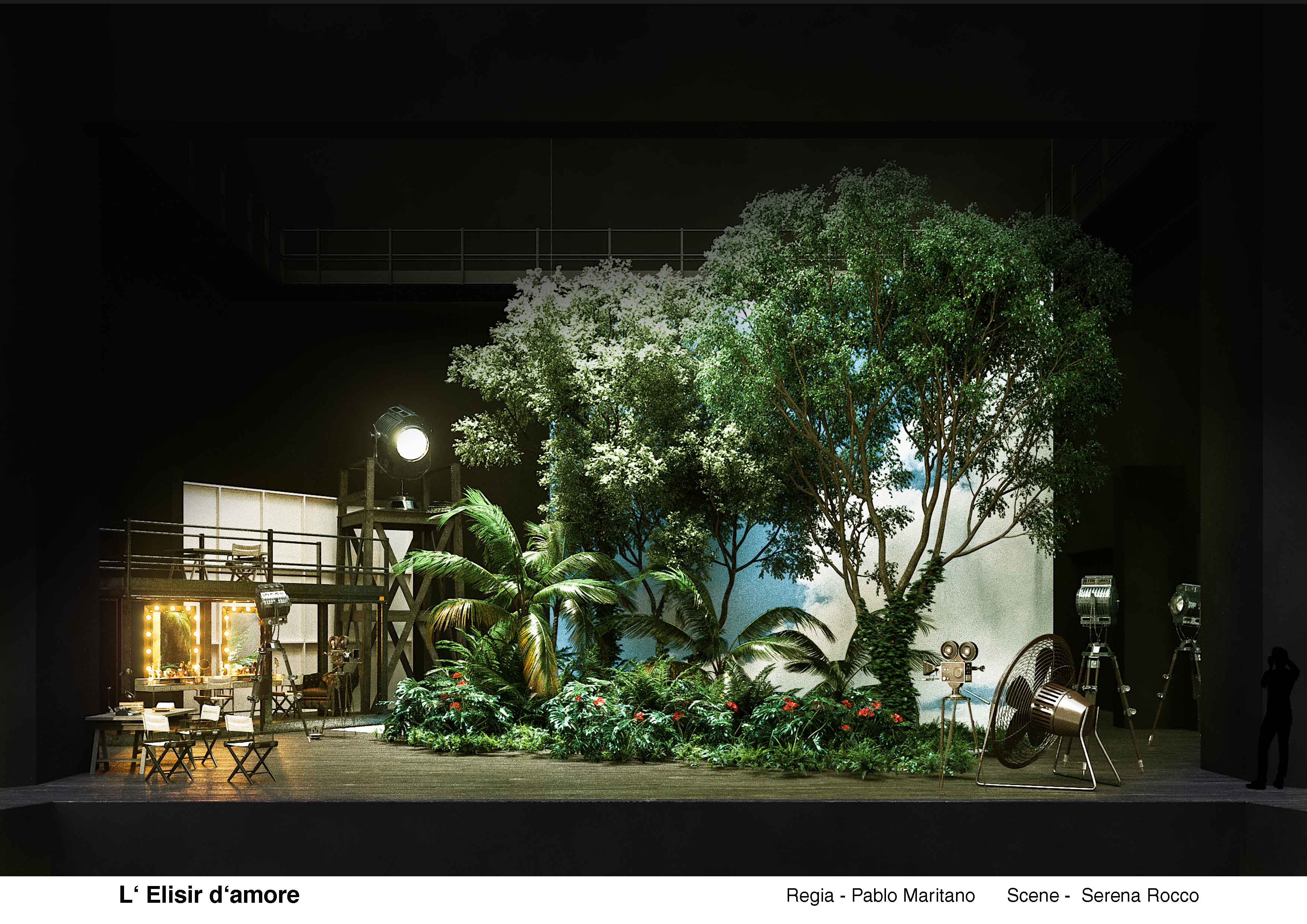 Being fully established on its seventh year, Opera (e)Studio, as is tradition, will open the 2019 Ópera de Tenerife season. Increasingly, more and more singers are interested in taking part in the initiative. The artists were chosen at international auditions held in Bologna, Tbilisi, Madrid and Tenerife and they will spend nearly two months on the Island, where they will undergo intense work sessions on musical and stage aspects leading to the performance of an opera title that is part of Auditorio de Tenerife’s opera season. This year the title chosen is Donizetti’s L’elisir d’amore, a coproduction of Ópera de Tenerife, Teatro Comunale di Bologna, and Tbilisi Opera and Ballet State Theatre.

Opera (e)Studio is a point of reference for young opera artists who have just finished their higher education and wish to make a start in their professional careers. This Ópera de Tenerife project has been acknowledged by the European Union, which is funding this year production through its Creative Europe scheme. Giulio Zappa as artistic and musical director, Pablo Maritano as stage director plus a wide team of professionals, including the Italian soprano Mariella Devia, will train the ten singers in all the aspects involved in staging a good opera production according to current European standards: musical and stage performance technique, style, direction, body language, theatrical nature of the role, historical context of the composition, dramaturgy, libretto studying, etc., in order to put on L’elisir d’amore, by Donizetti with the Orquesta Sinfónica de Tenerife and the Coro de Ópera de Tenerife.

She started to study singing at an early age and graduated in opera singing with honours. She completed her training with Damiana Mizzi and she is currently furthering her studies with Elizabeth Norberg-Schulz and Giacomo Prestia. She is a student at the Accademia del Maggio Musicale Fiorentino. She has taken specialisation master classes with major singers like Luciana Serra, Sonia Ganassi, Bruno De Simone and Giacomo Prestia.

Born in Lisbon, she studied at the University of Music in Vienna with Raimer Trost and at the Conservatorio del Liceu with Dolors Aldea. She is currently studying with soprano Sylvia Greenberg and pianist David Aronson in Vienna.

She started her career as a soloist on different international stages where her roles included Corinna (Il viaggio a Reims, Rossini) at the Rossini Opera Festival; Anima Ingrata (Il Ballo delle Ingrate, Monteverdi) at Dutch National Opera; Lucy (The Telephone, Menotti) at the Gulbenkian Foundation; Galatea (Acis and Galatea, Händel) at New Belgrade Opera and Pamina (Die Zauberflöte, Mozart) in different festivals in France and Austria. This has led her to work with conductors and stage directors like Alberto Zadda, Carlo Rizzi, Pierre Audi, Christophe Rousset, Michele Spotti, Paul-Émil Fourny and Yi-Chen Lin.

She has often been supported by the Gulbenkian Foundation. In addition, she takes masterclasses with Alberto Zedda, Ruggero Raimondi, Dolora Zajick, Ryland Davis, amongst other. In 2018 she won the 2nd Prize and the Mozart Award at the Grandi Voci competition in Salzburg.

He graduated from Universiteti i Arteve in Tirana, Albania. His repertoire includes the roles of Goro (Madama Butterfly, Puccini); Gherardo (Gianni Schicchi, Puccini); Peppe/Arlecchino (Pagliacci, Leoncavallo); Don Ottavio (Don Giovanni, Mozart); Tebaldo (I Capuleti e i Montecchi, Bellini); Alfredo (La traviata, Verdi) and Tamino (Die Zauberflöte, Mozart). This last role sent him on a tour across the country and France with the Opera Nomade Compagnie Lyrique, after winning the Concorso Associazione Lirica Concertistica Italiana. He recently took part in the production of Macbeth at Teatro Regio di Parma and at an aria concert in the Verdi Festival. He has also performed the role of Poisson (Adriana Lecouvreur, Cilea) at the Filarmonica di Verona and Vesperae Solemnes de Confessore (Mozart) at Teatro Bellini in Catania.

He won third prize at the Marie Kraja International Competition in Albania and took first prize at the As.Li.Co in the role of Tamino in Como, Italy.

Professionally, he has gradually directed his repertoire to opera in roles like Don Ottavio (Don Giovanni, Mozart); Tamino (Die Zauberflöte, Mozart) and Ferrando (Così fan tutte, Mozart). Also, Florville (Il signor Bruschino, Rossini) with the Gulbenkian Orchestra in Lisbon; Silango (Le cinesi, García) and Marquis Drouet (Vespri siciliani, Verdi) at the Rossini Festival in Wildbad, which was recorded live by Naxos Records. In this same festival, he performed the role of Demetrio (Demetrio e Polibio, Rossini) and Radosky (Sigismondo, Rossini). Regarding symphonic singing, he performed as solo tenor Mozart’s Requiem with the Camerata Salzburg on tour in Japan.

His talent has been recognised on different occasions and he has received the best young singer award at the Academia Belcanto-Festival Rossini in Wildbad, the Second Prize for Male Voice at the Concurso Internacional de Logroño and the role Pedrillo (Die Entführung aus dem Serail, Mozart), at the Clermont-Ferrand International Singing Competition, that will take him to different theatres.

Born in Italy, he completed his studies in piano and opera singing at the Conservatorio Niccolò Paganini in Genoa. He went on as a soloist at the Centre de perfeccionament Plácido Domingo in Valencia. Winner of international competitions, he has taken masterclasses with Alessandro Corbelli, Eva Mei, Mariella Devia, Jaume Aragall, Mietta Sighele, Leone Magiera and Henning Brockhaus.

In his career he has taken part at Villa Vento, Custoza, singing with Ramón Vargas; at Musica Riva Festival he made his debut in the role of Benoît and Alcindoro (La bohème, Puccini); as Ben Upthegrove (The telephone, Menotti) at the Teatro dell’Opera Giocosa in Savona and Teatro Carlo Felice in Genoa. His first performance at the Palau de les Arts Reina Sofía in Valencia was in the role of Marullo (Rigoletto, Verdi) along with Leo Nucci, under the baton of Roberto Abbado and director Emilio Sagi. At the same theatre, he played Gabriel von Eisenstein (Die Fledermaus, Strauss) in a concert conducted by Plácido Domingo.

He studied at Guildhall School of Music and Drama in London, under the supervision of Professor Rudolf Piernay.

His next engagements include Masetto (Don Giovanni, Mozart) at the Clonter Opera and Fiorello (Il barbiere di Siviglia, Rossini) at Opera de Colombia.

A graduate from N22 College in Batumi, Georgia, he furthered his training at Z. Paliashvili Central Musical School and at Batumi Art Teaching University. He also attended the Youth Music Theatre and Tbilisi State Conservatoire V. Sarajishvili. He is currently an in-house artist at Tbilisi Opera and Ballet State Theatre.

He has received different awards including being finalist at the Georgian Competition of Musician-Performers and best performance at the Concurso de Lado Ataneli.

He started his studies at the Università di Torino and continued his singing education at the Conservatorio Giuseppe Verdi di Torino, as well as his improvement in technique and repertoire with maestro Giovanni Botta.

She studied singing at the Conservatorio Superior de Música de Navarra and was awarded the End-of-Degree Prize. She also graduated in harp and musical pedagogy. She furthered her education at the ESMUC in Barcelona, getting a scholarship from Fundación Victoria de los Ángeles. She has broaden her studies with maestros like Alberto Zedda, Mariella Devia, Renato Bruson, Ana Luisa Chova, Ofelia Sala or Aquiles Machado.

Melodramma giocoso in two acts, L’elisir d’amore is an opera buffa with music by Gaetano Donizetti and libretto by Felice Romani, based on Eugène Scribe’s text Le philtre for Daniel Auber’s opera, which was premiered on 12 May 1832 at Teatro delle Canobbiana in Milan.

L’elisir d’amore is Donizetti’s most famous comic opera thanks to such unforgettable melodies as ‘Una furtiva lagrima’ and a lively plot in which the love affair of beautiful Adina and gullible Nemorino is possible thanks to the unlikely help of charlatan Dulcamara.

The stage director, Pablo Maritano, has taken care of the stage design of a production that will transport us to the golden age of cinema. A fantasy world through different late 1920s film sets.